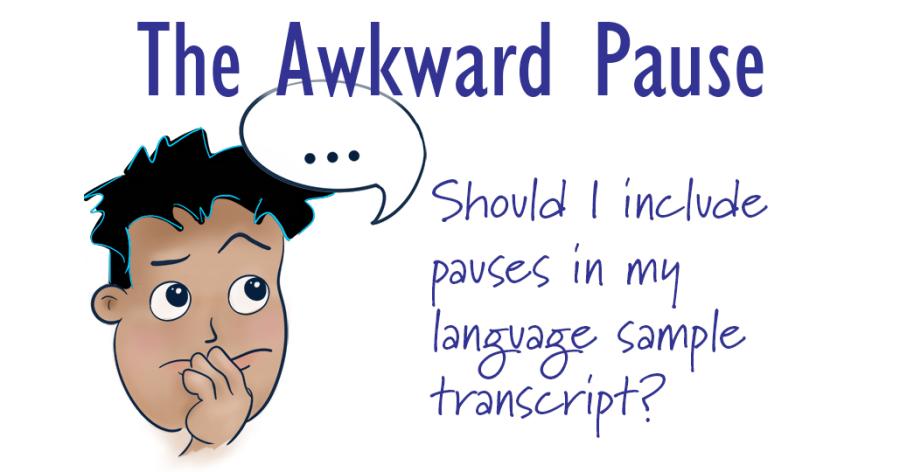 Should I include pauses in my transcript?

The Awkward Pause! We’ve all been there. Maybe the awkward pause was during a casual conversation with a friend, or when you were talking to someone new at a party and ran out of interesting things to say. Pragmatically, we feel compelled to fill that pause with something! Part of learning to take great language samples is overcoming our fear of the awkward pause. But if we tolerate a little discomfort from those awkward pauses during a language sample elicitation, we can learn more about a speaker’s language abilities and performance. There are a lot of reasons we see pausing in spoken language contexts. Just last week I was completing an evaluation and my student paused for eight seconds when responding to a wh- question. I waited out that awkward pause (patiently, I might add). But, certainly in a busy classroom, this length of a pause would likely be noticed, and/or the speaker would probably be interrupted. As it turns out, that student did not have issues understanding or processing language, but rather utterance formulation difficulties. So, we’ll work on strategies to address utterance formulation. Another student I recently evaluated used frequent silent pauses and very clearly had word retrieval difficulties. This student would even say, “I don’t know the word I want!” in a very frustrated tone. Here are my top three reasons to mark pauses in your transcript: 1. Verbal facility This includes speaking rate, pauses as a percent of total time, mazes, and abandoned utterances. Verbal facility really is a vital part of spoken communication, and silent pauses can highly impact verbal facility! I recall learning in grad school that people “lose their listener” after a two second pause. This has proven to be true in my experience. So really working on skills that increase verbal facility are essential to functional communication. Clinically, I have witnessed frustration on both sides of the communication dyad when there are excessive pauses. The listener tires of waiting (annoyed) for the speaker to get his/her ideas across, and the speaker is frustrated because they sense the conversational partner's angst - and they are stressing their linguistic system to produce more fluently. 2. Often overlooked, but essential, information Number and length of pauses, where they occur, and how much total pause time accumulated during a language sample is information that you may overlook if you don’t include pausing information in your transcription. But it may be very telling diagnostically. When you mark silent pauses, not only can you learn about frequency and length, you also learn where these occur. What does it say about language production when the speaker pauses within her own utterances? What about when she pauses between each of her own subsequent utterances? What if the pauses occur between utterances when there is a change in speaker? When we look at pause information closely, it may provide direction and rationale about language processing, formulation/planning, and/or verbal fluency, And knowing how much pausing and where pausing occurs can inform how we decide to remediate, should that be a goal. 3. Data and documentation It’s quite simple to document pauses and then use that information to track change (hopefully progress) over time. Did the length, number, and/or location of pauses change post therapy? Did change occur across contexts? Why? Is, for example, narration more challenging to the speaker, and pausing is the way for her to buy time to process and/or formulate? This is one of the best parts of annual IEPs; when you have the data to show how great kids are doing! Yay student! Yay me! Yay all who’ve supported the goal! Documenting pauses can help parse out underlying difficulty and assist in making data-driven decisions.

Putting It Into Practice

Personally, I feel it’s easier to elicit a story retell sample because the examiner has a minimal role. It’s easier to not “jump in” when you aren’t required to engage in a typical dyad. However, I often end up eliciting a short conversational sample because I want to see how the student responds to questions, handles turn-taking, or I might be interested in other discourse measures. Or, honestly, because I only have time for a shorter sample. If I am absolutely crunched for time, familiar with the student, and don't have concerns with verbal facility, I might not include timing information in my transcription, and forgo getting verbal facility information from the language sample.. However, if I am completing an initial evaluation, or if there are concerns with rate, word retrieval, or utterance formulation, I always include silent pauses when transcribing since analyzing pauses can really inform therapy decisions and make for a more comprehensive evaluation. Here are a few “profiles of pauses”: Example one: “Can’t find the words” Pauses that are indicative of word-level problems (word finding difficulty, for example) tend to occur within an utterance. Oftentimes they are shorter in length and occur before main verbs, subject or object nouns, or adjectives (Miller, et al. 2019, p 80) insert full citation. You may notice this profile in speakers who are learning English as well.

Example two: “Can’t put a sentence together” When students have difficulty formulating a sentence we may see an increase in longer pauses between utterances or after a longer maze. For example, a speaker may be producing more utterance revisions or repetitions that are followed by a pause. These speakers tend to pause between utterances and within utterances.

Example three: “Doesn’t really understand the question or needs more time” In the case of language processing, pauses will likely be between speakers, generally after a question. Sometimes the speaker takes more time to process language and needs that extra bump of time in order to respond correctly to questions. Other times, it’s fairly obvious that the speaker did not understand the question or prompt. 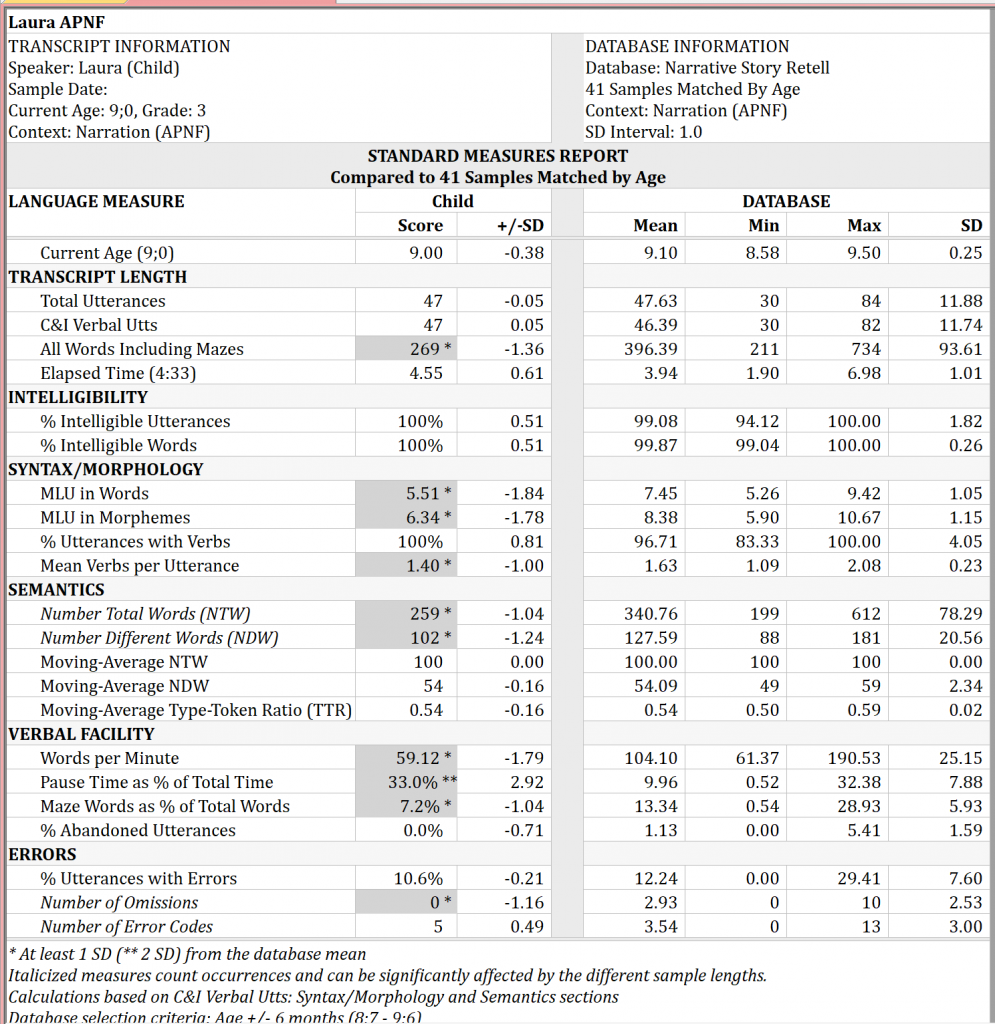 Note the “Verbal Facility” Section of the Standard Measures Report above: it shows that Laura's scores are more than one standard deviation from the mean for Words per Minute, Pause Time as % of Total Time, and Maze Words as % of Total Words. Let's run the Verbal Facility Summary Report to get a better look. 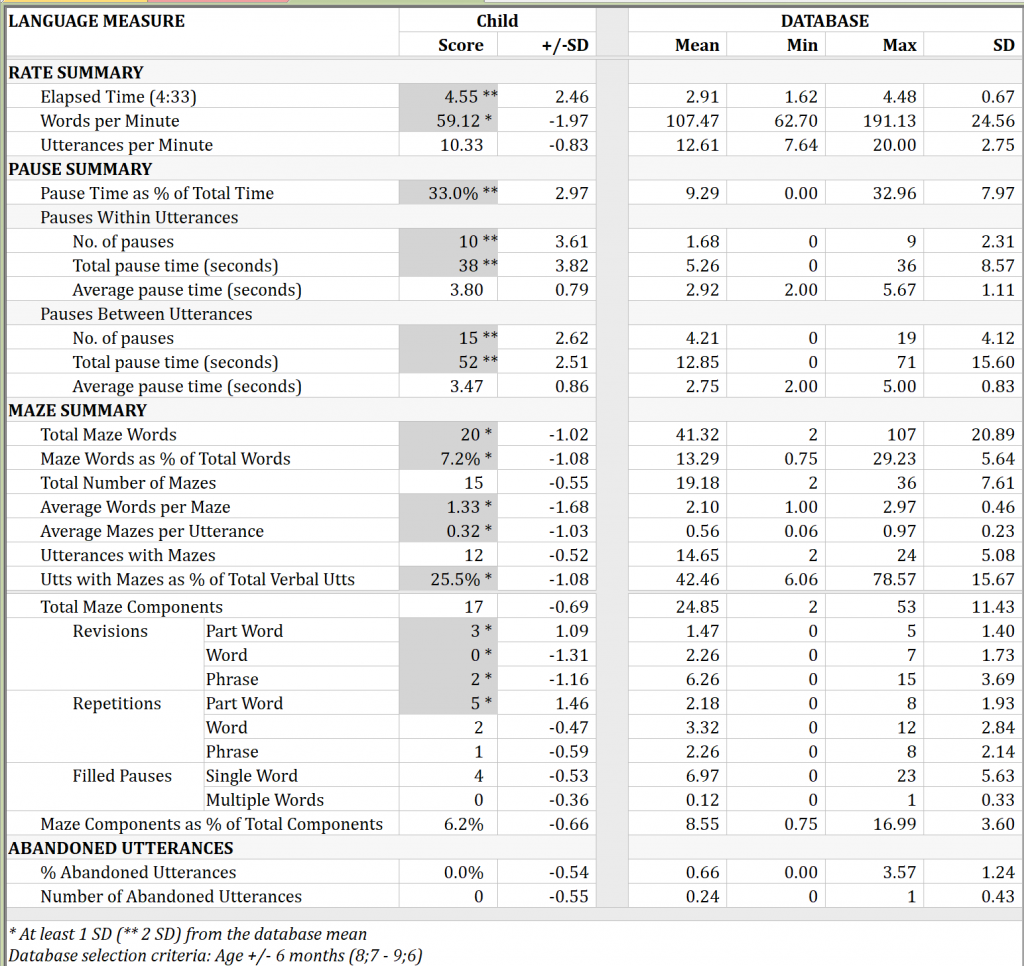 Pausing behaviors show up for myriad reasons. It’s our job to document and analyze them to hone in where, how frequently, when, and why they’re being produced. SALT offers reports that detail pauses in a way that makes analyzing pauses easy. That information can guide us toward our best interventions!