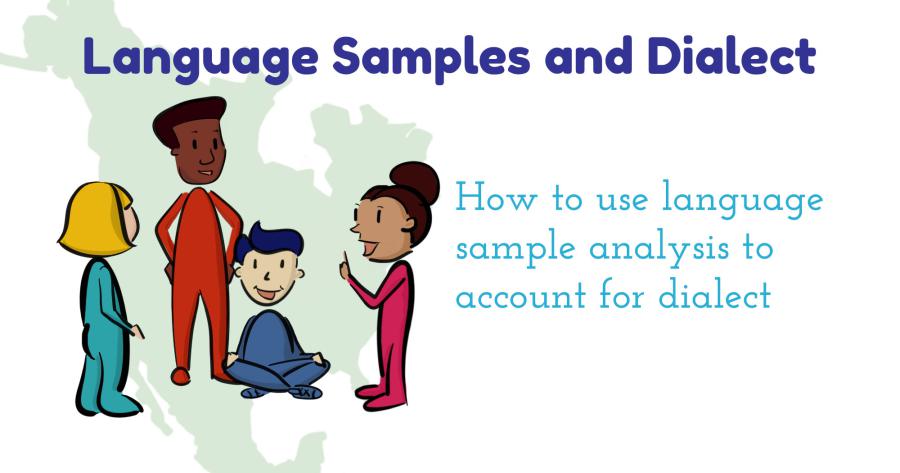 The way we talk is a window into who we are, where we came from, and how others perceive us. When I moved to the Pacific Northwest (PNW) the locals thought I had an accent. Some vocabulary words are different in the PNW. I had one student tell me about going out on his quad and I had no idea what he was talking about. In the Midwest, where I am from, a “quad” is called a “four-wheeler.” On another occasion I remember feeling so off-put when someone asked me if I was from Minnesota. “No! I’m from Wisconsin. Wisconsin is NOT Minnesota.” My own personal experience is a low-stakes example of how, just by talking, we reveal a lot about ourselves, e.g. I’m not from here!  There are many dialectal differences that SLPs may see in their school population. I like to start my evaluations with a parent/guardian interview. I want to know if the family has any concerns. But the interview also allows me to hear how the family speaks. I am listening for simple indicators, such as the “error” of subject-verb agreement. If I call home and the family is not using mainstream subject-verb agreement, I may assume that my student has routinely heard this way of speaking since they first started talking. So, is this a disorder? Likely not. We talk how the people around us talk. So how can I get to the business of figuring out if the student needs speech-language services?   ASHA states that, “All dialects are systematic, rule-governed communication systems and use of a non mainstream dialect should not be mistaken as a communication disorder,” (American SpeechLanguage-Hearing Association, 2003).  Certainly, we can all agree on ASHA’s position on dialects. But how do we account for various dialects when we are asked to complete evaluations? We administer standardized tests which are normed on mainstream English-speaking participants. We also utilize informal measures, observations, and even work samples if we are in a school setting. It is challenging for SLPs to know all the nuances of every dialect and every English language learner’s first language, as there may be dozens of cultures represented in the student population. There is no way to become completely competent in all dialects or language differences.  We can, however, approach our evaluations with a culturally responsive mindset and take a deeper dive into expressive language skills that might just be dialectal in nature rather than a developmental language disorder. New research shows promising avenues for SLPs approaching dialects they are not fluent in. Below is a quick sketch of three approaches we think are helpful. In her article in the ASHA Leader (November/December 2020), Janna Oetting encourages an inclusive approach that names General American English as one of many dialects, no different from the Appalachian English or Cajun/Creole English dialects, for example. This helps to normalize dialects and helps SLPs better explain that a developmental language disorder shows within a child’s dialect, not outside of it (Oetting, 2020). Oetting also explains that there are clinical markers that are “dialect universal,” such as:  These markers better assess language skills than do language features that may be influenced by dialect (e.g., past tense forms).  Others (Johnson and Koonce, 38) support a patterns and systems approach to account for dialect in language samples. Analyzing samples with this approach focuses on characterizing dialect, such as AAE, in terms of broader systems. This approach examines features, identifying patterns used systematically, and if patterns of language function as a unit (e.g., system). The patterns and systems approach goes beyond solely looking at features in isolation. Yet another approach is analyzing language using a morphosyntactic-features based approach.  In this model, the specific features of the dialect are accounted for, such as deletion of “to be” verb forms and subject-verb agreement in African American English. Here are just a few examples (by no means extensive) of various dialects’ morphosyntactic features (some features overlap):

African American English You walking. (You are walking) I ain’t going. (I am not going) I don’t got none. (I don’t have any) He had went home. (He went home) Southern White English She wanted her some ice cream. (She wanted ice cream) This my first time riding. (This is my first time riding) Hawaiian Creole Get too much tourist nowadays. (There are too many tourists nowadays.) Now you da head man. (Now you are the head man) Da baby cute. (The baby is cute)

Oetting’s approach is a great place to start. And either a systems and patterns approach or a morphosyntactic-features based approach will give you the tools you need to really dig into a specific dialect. Pick the approach that works best for your needs.

How SALT Can Help

Regardless of your preferred method to account for dialect, language sampling can be modified to suit your analysis and get better, more reliable data. Simply by using language sample analysis, we have already reduced the test bias by quite a bit. Any bias that may be found in conversation, persuasion, or expository contexts, for example, would be imposed by the examiner. We need to be aware of our biases and work to mitigate them, but, fortunately, that is relatively easy with LSA.   SALT’s flexibility is unique. How you transcribe using codes and conventions impacts the analysis of the features of interest, or their impact on spoken language. There are several options using SALT and LSA that accomodate or account for dialect. If you want to use features-based approach you can include coding schemes in transcription to mark the morphosyntactic features of a dialect. If your method is to look at language from a broader, dialect-universal approach, SALT produces relevant language analysis outcomes that you can explore using this method.

Some areas to explore, if you are looking for universal markers of possible language impairment, include:  These universal features can easily be measured using language sample analysis with SALT.  For example, the use of non-specific vocabulary can be analyzed. In the “Explore Word and Code List” option in SALT software, you can customize lists of words and generate reports with data on occurrence, expanded by utterance. Set up a custom list with the non-specific labels. Common non-specific vocabulary includes: this, that, thing and stuff, but you should also include any labels that you notice your student using. These lists can be saved and reused. 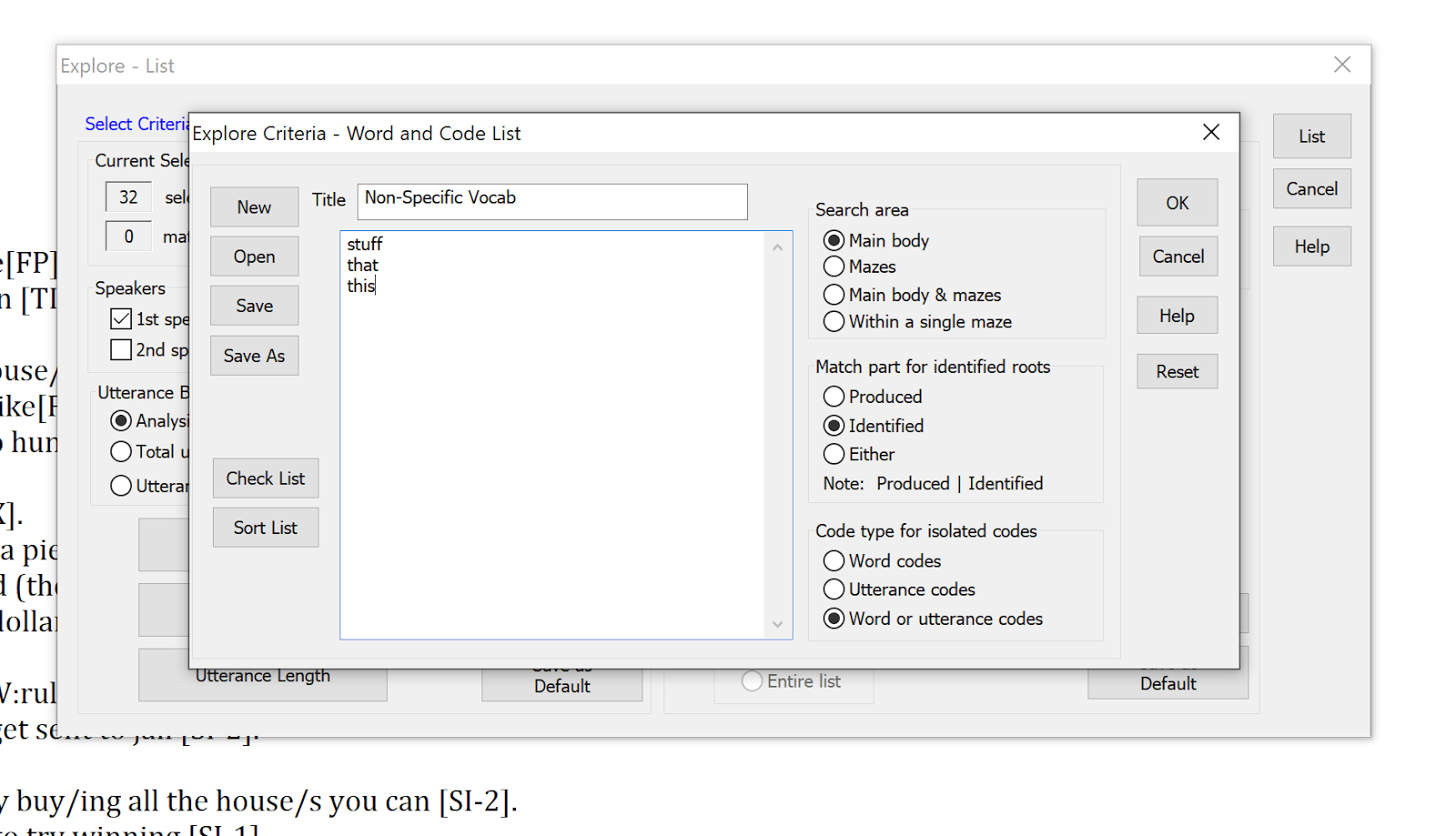 As for sentence structure, measures such mean length of utterance and scoring utterances for the Subordination Index (a measure of clausal density) could inform overall sentence structure.  Percent verbs per utterance is another measure that could be examined more closely.  Exploring use of past tense verbs could also be a way of analyzing ability to relay past events. Consider using the “Grammatical categories” option to explore verbs. Morpheme summaries can reveal past copula and/or auxiliary verb use. But be aware that verb markings can be specific to dialect. You might want to create a custom code to mark sentences that clearly express the past tense, without marking the specific verb form. There are several options to mine information on use of past tense!

For some SLPs it is time well spent to familiarize themselves with dialectal features and to analyze productions more dialect specifically. A morphosyntactic approach is good for this. In SALT’s book, Assessing Language Production Using SALT Software, Professor Julie Washington wrote a chapter on analyzing the morphosyntactic features of African American English. She states that, “Historically, it has been difficult to distinguish the linguistic features of African American English from the linguistic forms characterizing language disorders,” (Washington, 129). She identifies 21 dialect features that can be coded in a language sample and then analyzed. Within the language sample, we recommend marking utterances that contain dialect with a code [D]. Or, for a more detailed assessment outcome, add the specific code for each morphosyntactic feature. The SLP can look at utterances containing dialect and determine if the feature is part of a dialect or “something else.”    Consider the following utterances from a language sample collected from a student who uses AAE:

If the SLP does not account for dialect, these productions might be coded for, and counted as errors if compared to mainstream English speakers’ samples.  Ultimately, at that critical point when you are analyzing data to determine if a student truly does have a language impairment, accounting for dialect is critical! There are various approaches to document and assess dialect, but language sampling can be central to your methods.    Joyelle Divall-Rayan, M.S., CCC-SLP SLP: Vancouver, Washington Director of Education & Training: SALT Software