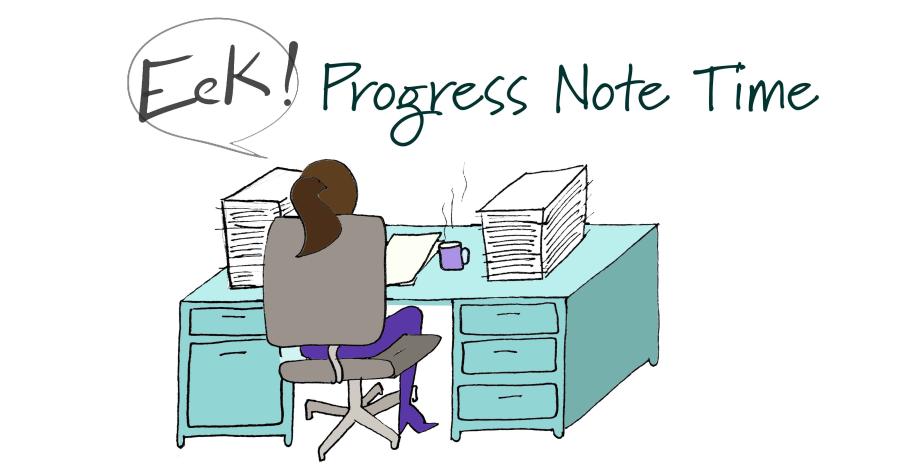 We just wrapped up the second trimester at school and I finished writing out progress notes for nearly 60 kids on caseload, all of whom have multiple goals on which to report. Every trimester I’m a little daunted by the fact that I have to write progress notes on top of managing therapy sessions, evals and IEPs - it’s another thing to get done. I need to be pretty focused if I’m going to ever get the progress notes done! I find myself scrolling through my embarrassingly messy treatment notes that I have scrawled down as I’m wrangling kids out the door so I can go get my next group. Not surprisingly, a lot of times I don’t have the best data in my treatment notes. For language goals, progress tracking can take a little more effort. I can’t just make a t-chart and count how many accurate trials of a speech sound occurred. Language has to come a bit more organically than articulation drill work. At least, that’s how I write my language goals. So, around trimester time I might collect language samples to track progress on goals. Since I have a lot of kids to write notes on, I’m not thinking of doing a whole narrative retell or a 100-utterance language sample; I’m thinking of using very short and focused language samples and using SALT’s Analyze menu (no database comparison) to generate numbers for progress notes and maybe some description of progress too. To illustrate, consider the following goal: When given a structured language task, “Johnny” will generate an utterance containing an action word from 50% of utterances to 90% of utterances as measured by SLP data or language sample. In this example the student demonstrated some pretty significant gaps in vocabulary that became apparent after the evaluation. The student used mostly nouns, filler words, and erroneous words (word choice errors). This was somewhat odd, and one could detect that something was “off” in his expressive language, but not until running a language sample analysis did it become glaringly obvious that most of the time the student was not using verbs. So, I drafted this goal and focused therapy on learning academic vocabulary that were verbs, highlighting verbs through reading books, acting out verbs through playing Charades… you get the idea. Therapy was all about verbs for most of the year! However, I wrote the goal for generating utterances with verbs so I needed to see how much generalization was happening with verb use. I had my baseline data from the initial language sample so I collected another (very short) language sample. We ended up discussing a book that was read in library class, Dragons Love Tacos, by Adam Rubin. It’s a captivating story about dragons throwing a taco party and chaos ensues when the dragons get into hot sauce. Kids love this story! Transcription Shortcuts: Recall that I had tons of progress notes that need to be finished! I kept transcription to a minimum: no examiner utterances, morphemes, or pauses were transcribed. I really just focused on verbs in spontaneous utterances, while still ensuring that I would be able to use this same format for my next trimester progress notes. So, I quickly transcribed 20 utterances and marked only omissions of obligatory words. This took about five minutes; it’s the quick version of transcription. The Analysis: Again, I wanted a quick analysis for the progress notes. After I transcribed the language sample, I only ran two SALT reports: first, the Grammatical Categories for a word list and count of verbs; and second, the “Omissions and Errors” report. Both of these reports are found in SALT’s Analyze menu. I didn’t need to worry about a database comparison since this was not a formal evaluation where I need normative data. Also, I didn’t use an elicitation that would be comparable to the SALT reference databases. Analyze menu --> Grammatical Category List --> Verbs: 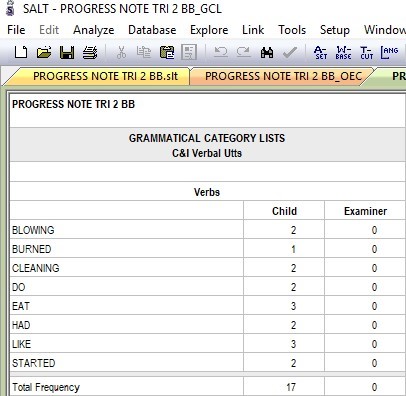 This report showed that the student used 8 different verbs, almost all of them multiple times. Analyze menu --> Omissions and Errors: 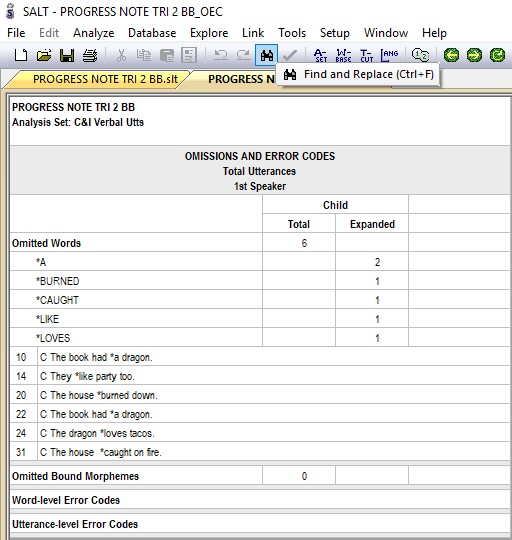 This report revealed that 4 verbs were omitted. Relating this back to the goal of increasing the number of utterances containing verbs, I calculated 16 of the 20 total utterances contained a verb since the verb was omitted in 4 of the utterances. So, I can document in my progress notes that “Johnny” used action words in 80% of his utterances. This language sample should also come in handy when I have to write another progress note for the following trimester. I can use the same “structured language task” (as written in the goal) and transcribe again. Discussing books that were read in library class works nicely for something interesting to talk about that changes throughout the year (different text read) and yet uses the same structure (listening to a picture book). I often use SALT as a formative assessment tool during therapy to update goals and show progress (or regression) in an organized way at any time throughout the school year/treatment. This program allows me to easily track progress and have confidence in the data I am reporting. Sometimes it’s surprising how much progress kids can make without us even noticing when we’re in the midst of busy speech therapy life!