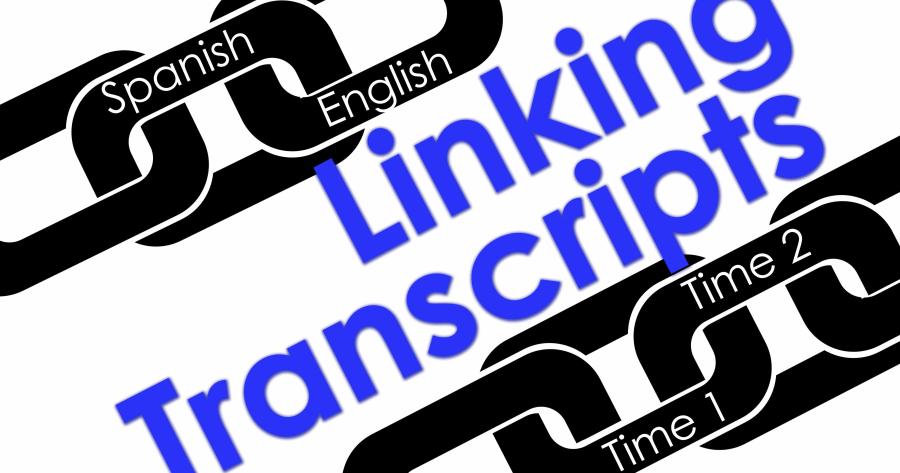 One of my favorite features of SALT software is the linking option. Basically, the program lets you link any two samples so that all reports are generated with the data from BOTH language samples presented side by side. Having the data simplified and in one report is a convenient way to present data in IEP meetings or for interpreting data yourself while writing diagnostic or progress reports. In previous posts, we’ve talked about linking for showing progress in time 1/time 2 samples, which is usually when I use the linking feature. However, there are a couple other situations when linking samples is extraordinarily helpful. Linking Different Sampling Contexts In addition to showing progress over time, SLPs may be interested in analyzing different speaking contexts. We know that different speaking contexts produce different types of results in expressive language performance. If we consider just one language measure, mean length of utterance (MLU), we can see that speaking context impacts ML (in morphemes) significantly. Take a look at the graph below: at age 10, the MLU increases from approximately 7 morphemes in an average conversational language sample all the way to 12 morphemes in an expository sample. 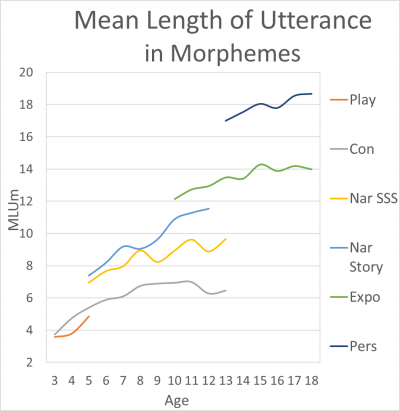 If we present a more linguistically challenging task, typical speakers use more sophisticated language; we expect that. Using a different sampling context can help detect language difficulties in tasks that more closely relate to curriculum demands in school. I notice that a lot of times kids can do pretty well in a casual conversation but then start to fall apart when presented with the challenge of organizing language and conveying information efficiently using sophisticated or demanding vocabulary. Conversely, a student with Autism Spectrum Disorder or social language impairment may demonstrate better language skills on speaking tasks that are not interactive in nature. The point is, different sampling contexts can really inform your evaluation and goal setting. Consider the following case study: 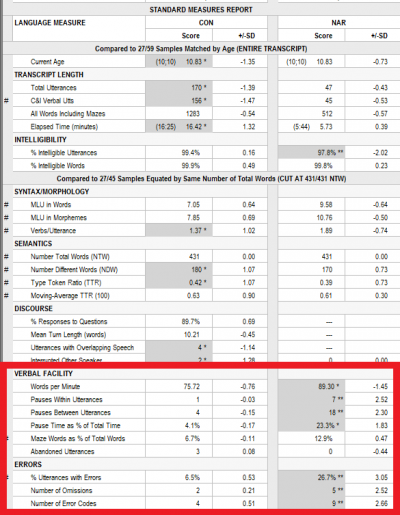 In this example we are examining both a conversational language sample and a narrative story retell taken at the same time from a 5th grade student. The samples are linked for easy side-by-side comparison. The comparison was based on the same number of words for each sample. The speaker’s score is reported as is the standard deviation. Notice the Mean Length of Utterance is as we would expect, with a higher MLU of 10.76 in the narrative retell and a lower MLU of 7.85 in the conversational sample. Both of these measures are within the average range when compared the database. Semantic measures such as number of total and different words are also in the average range or slightly above average (in the conversational sample). However, if we scan down to the verbal facility and errors section of the report, we start to see some breakdowns. Pauses occurring between utterances increased from 4 pauses in the conversational sample to 18 in the narrative sample. The narrative retell sample also had a higher percent of pause time (of total time) than the conversational sample (23% compared to 4%). Likely, this is due to utterance formulation difficulties that are exposed by a more linguistically complex task. There was also a spike in the percent of utterances with errors in the narrative sample at 26% of all utterances containing one or more errors. From these outcomes, we can see and support our clinical impressions that, with a more complex task like a narrative retell, the student had more difficulty conveying his ideas in a clear and concise manner. In contrast, the student presents with pretty typical language skills in a conversational sample. Linking Bilingual Language Samples Another opportunity to use the linking feature is when comparing English and Spanish samples from bilingual speakers. In the bilingual elicitation protocol the speaker completes a story retell in English and then completes the same task in Spanish. The samples are compared to SALT’s bilingual Sp/Eng database. It can be striking to see the differences in production of the two different languages when samples are compared side-by-side. In a previous blog post, we reviewed a case study where the speaker most likely did not have a language disorder: despite the fact that the speaker’s English skills were lower than the database comparison, their Spanish skills were within normal limits. See the graphic (below) displaying the Standard Measures Report when the Spanish and English samples are linked together. 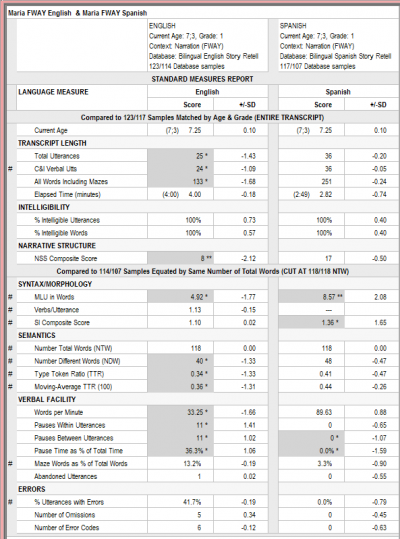 The Mechanics of Linking Samples in SALT Here are the simple steps to linking transcripts in SALT: 1. Click “link” in the tool bar, then “link transcripts”. 2. In the dialogue box, click “open” to browse for your first sample. Do the same for the second sample. 3. Click “link” in the dialogue box. 4. Run your SALT analyses. There are a few additional parameters that you should be aware of – how to determine what part of the samples should be compared, for example. For more detailed step by step instructions see our YouTube video on this subject. Linking can be a useful tool when using SALT software for more than just monitoring progress! I’ve found the side-by-side reports to be extremely useful as a visual during meetings to show differences in language samples. Give linking a try! It’s fast and easy to use.