Those were the Good Ol’ Days: Historical Trends in Language Sampling and Analysis 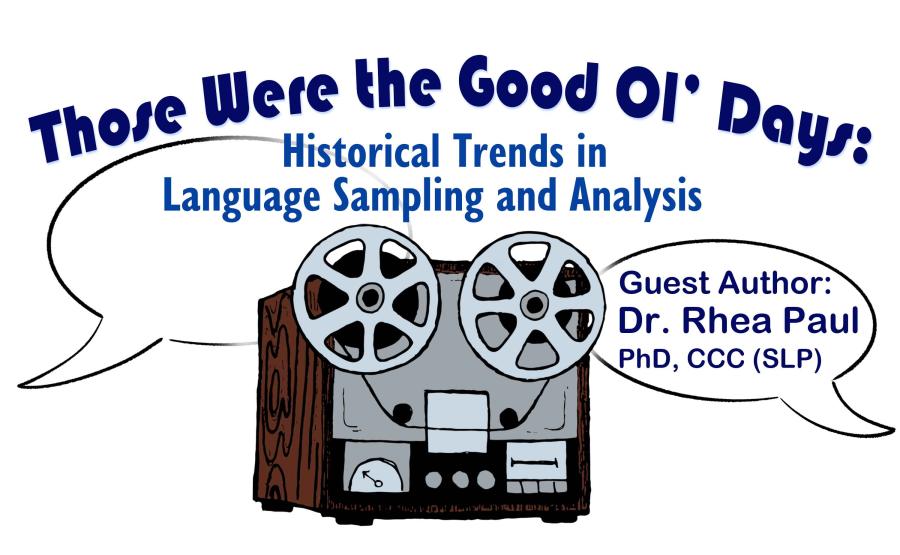 Those were the Good Ol’ Days: Historical Trends in Language Sampling and Analysis

Rhea Paul, PhD, CCC-SLP Sacred Heart University Rhea received her Ph.D. from the University of Wisconsin-Madison in 1981, and has taught language development and disorders in children for over 30 years. You probably know her as the author of the quintessential textbook: Language Disorders from Infancy Through Adolescence. Her latest projects include her podcast, Let’s Talk About Super Special Kids & Cake, with co-host Donia Fahim. Check it out on Apple Podcasts or Spotify: Apple Podcasts: https://podcasts.apple.com/us/podcast/lets-talk-about-super-special-kids-cake/id1446307245 Spotify: https://open.spotify.com/show/1I7FfBEWww2cJgtnJKoCGi

Do you remember 8 track tapes? Listening to them on your car’s tape deck or on a boom box? If that seems like ancient history to you, or if you don’t remember it at all, you may never have thought about what life was like for speech-language pathologists (SLPs) before we could record whatever we like on our phones. But in point of fact, people interested in children’s language development and disorders have been recording kids’ speech with whatever technology was available for well over 100 years. And there were quite a lot of them! One was Charles Darwin, who kept detailed handwritten recordings of his children’s early speech productions in the 19th century (Bar-Adon & Leopold, 1971). If you are an SLP, you may have come across the name Mildred Templin (1957) in your studies. She used language sampling to establish norms for the acquisition of speech sounds, vocabulary, and amount of talking. She was perhaps the first to note significant differences in language production based on SES. Working in the 1930s-50s, before the age of even the tape recorder, she sat in the back of classrooms writing down everything she heard children say. But the practice of language sampling was really kick-started by the advent of renewed interest in syntax as a window into the organization of language in the mind, sparked by Chomsky’s (1957) seminal work. In the 1960s, psychologists with an interest in language began looking at young children’s spontaneous speech for information about their grammatical acquisition patterns, using language samples taken over many months from a very small number of children to trace developments such as noun and verb inflections, negatives and questions, and sentence structures. Most of these pioneers were still hand-transcribing from live observations. But another innovation that arose just around the time of Chomsky’s nudge toward interest in child language as a “natural experiment” for describing syntactic complexity, was the availability of the magnetic tape recorder, which changed everything in LSA. It was soon possible for anyone to, relatively cheaply and easily, to record audio material. MacWhinney and Snow (1984) describe the impact of these devices:

“…It became possible to make records of child language productions that were far more complete than the diaries that had been compiled from pencil and paper notes. With these new data, the field was able to advance well beyond the level of anecdotal summaries that had characterized the first 100 years of child language research. The new methodology permitted full recording of not just the child, but also those who interacted with the child. This new possibility slowly turned the field's attention to studies of the input to the language- learning child. During the 1960s and 1970s, researchers continually improved their use of recording technology, using directional microphones, wireless microphones, well-justified sampling strategies, non-intrusive recording methods, and detailed systems for coding aspects of the communicative context” (p. 272).