Why do we mark some bound morphemes and not others? 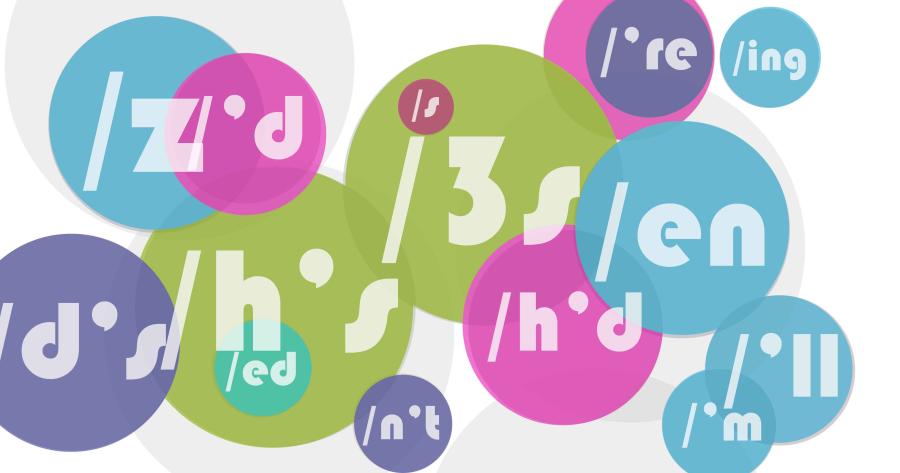 Why do we mark some bound morphemes and not others?

Roger Brown
Harvard University[/caption] To a large extent, SALT’s convention for marking bound morphemes is patterned after the conventions used by Roger Brown (1973) in the calculation of MLUm (mean length of utterance in morphemes) back in the early days of language sample analysis.

When children use inflectional morphemes, they are (generally) demonstrating their knowledge of the base word as well as their ability to encode the plural, possessive, or tense of that root word. Derivational morphemes, in contrast, are used to create new words or to make words of a different grammatical class (part of speech) from the root form. For example, by adding the derivational morpheme -er the verb read becomes the noun reader. The addition of -ize changes the adjective normal to the verb normalize. Similarly, we can derive the adjectives helpful and helpless by adding -ful and ‑less to the noun help. However, some derivational morphemes do not change the grammatical category of a word but they do significantly change the meaning of the word. For example, we can derive the nouns neighborhood and kingdom by adding the derivational suffixes ‑hood and ‑dom to the nouns neighbor and king. And derivational prefixes such as un- and re- generally do not change the category of the word to which they are attached. Thus, both happy and unhappy are adjectives, and both fill and refill are verbs. But each of these pairs of words, although clearly related, have very different meanings. Derivational morphemes may be either suffixes or prefixes and usually, but not always, result in a different grammatical category. The following table lists some of the common derivational morphemes:

According to Brown, young children generally do not learn a base word and then apply a derivational morpheme to encode extra information. Instead, they usually learn these as fully-formed, independent words with their own specific meaning. Although derivational morphemes can logically be split into a root word and a prefix or suffix, these smaller parts are not meaningful to the child speaker and so they should not be considered separate morphemes in this case. Guo, et al. (2018) gives evidence for this, including:

So what are the rules behind the SALT conventions?

RULE 1: Do not mark derivational morphemes. Do mark (most) inflectional morphemes. Why? In short, we want to mark bound morphemes when they reflect the child speaker’s understanding that the prefix/suffix has a meaning separate from the root word. When using derivational morphemes - learned as fully-formed, independent words - a child speaker is only utilizing a single meaning. In contrast, when using an inflectional morpheme, the child is utilizing two meanings: the root word and the encoded plural/possessive/tense meaning. By not marking derivational morphemes, we do not give the speaker credit for bound morphemes which change the meaning of the word (e.g., happy → unhappy) or change its grammatical category (e.g., friend → friendly). However, when the child speaker is likely to have understood the separate meanings of the bound morphemes, we do want to mark them. So we mark most inflectional morphemes. Most, but not all... RULE 1a: Do not mark the comparative (inflectional) morphemes -er and -est. Why not? Although -er and -est are inflectional morphemes, Brown did not count them because they are not obligatory. According to Guo, et al (2018), this means that it is a stylistic choice whether to use comparative and superlative form rather than the uninflected adjective. For instance, when given a choice of several balls of varying sizes, a child may select the largest one and say, “I have the big one” unless prompted to make a comparison. RULE 1b: Do not mark irregular forms. Why not? Irregular forms are counted as single morphemes because children (generally) learn them as separate forms, rather than inflections of their base forms. The following table lists examples of irregular words:

Some words are irregular because the sound of the base form changes. These words follow the standard spelling for inflected or contracted words but change its sound. Some examples follow:

RULE 1c: Do not mark plurals for words which do not have a singular form. Why not? Children would not have learned the singular form in order to then apply the rule for plurals. Following are some examples:

RULE 2: Do not mark concatenatives. Why not? Brown counted concatenatives as single morphemes because, like irregular forms, children may have stored them as holistic chunks. Following is a list of concatenatives:

RULE 3: Mark contracted words. Why? Contractions combine two words into one (e.g., we are à we’re). The speaker is given credit for the same number of morphemes whether using two words or the one contracted word.

These rules can be summarized as:

While we feel that Roger Brown’s research published in 1973 has stood the test of time, we understand that it is not the only way to understand the use of morphemes or to calculate MLUm. If you have a language sample which you want to compare with samples selected from the SALT reference databases, then these conventions are the most appropriate. However, these conventions may not be appropriate for all speakers or in all cases. Future blog posts will highlight some of these alternate scenarios and how they can be accommodated using custom coding schemes in SALT.